Skip to content
Being Intelligent doesn’t mean that the beliefs a person has, will reflect his/ her intelligence. Moreover, Belief is independent of Intelligence. Intelligence may or may not lead people to be more or less believers in weird things. But it might enable people to better defend beliefs in weird things that they started believing in for reasons other than intelligence. This is what I can infer from the recent statement of Mr. Satyapal singh on Theory of evolution and its validity. 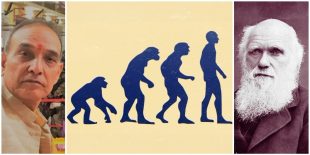 we can believe in something without thinking but we should not believe in Just anything after thinking, i.e. using our own intelligence. we need to think to believe. For that matter, it is primarily intelligence that separates us from the apes and other species of animals.
Therefore, we need to have a sound method to validate our own beliefs periodically. We  need to challenge, contradict and debate these beliefs and present evidences in support of our beliefs. But in absence of such method, these irrational, untested weird beliefs somewhat sink deeper into our ideology, the core of what we believe about life and such fundamental issues. Perhaps that is how dogma evolves! and even seemingly intelligent people fall for it. A belief becomes a dogma or set of conclusions that never gets questioned or not allowed to question. Further, this founded irrationality or dogma takes shape of an ideology/ belief that becomes immune to change.
When such individuals accumulate further knowledge, their ideology and theory becomes ever more well-founded. They develop a sort of confirmation bias as they only refer and/or read what they have come to believe in not the other side. They don’t indulge in open debates, they keep seeing the world from their age old lenses no matter how novel the new information is. This leads to stagnation of intelligence – a dark age.
Thousands of year ago there was a different India. Much liberal, much diverse and much open to new ideas. This was the age where the intelligent Indian had methods to debate and discuss their belief. Sadly we have lost that tradition. not just the tradition i.e process, we have also lost the method i.e. technique. If the oldies and conservatives want to review anything from ancient India they should revive that tradition of debate and discussion.
At present, there is a lot of fear and misunderstanding among the Indians. Fear particularly caused by caste and religion. Sadly there is absolutely no way to dispell this fear because none of the leaders is using his/her intelligence, rather they indulge in glorifying the past as it is without discussing the processes involved. Their arguments stink with ideologies shaped by dogma rather than their intelligence as a result mostly their age fails to represent wisdom.
This trend is worrisome, dangerous and disastrous. Particularly in the context of 21st century’s rapidly changing and rapidly evolving societies. Particularly in politics and governance, we cannot expect such leaders to design policies for the future generation, they are bound to drag us into their version of past. We need to be cognizant of the fact that ignorance and superstition can spread if they gain too much currency, and this can lead to both personal and political disasters. The only way out can be shaped by clear thinking. We need to defend and educate about the art of argumentation, questioning and clear thinking, that will be a real tribute to our ancestors, and a testimony to a fact that we humans are really intelligent beings!

Sab Moh Maya hai! You must have heard this narration so many times, but like me even you might be unaware of its deeper meaning. Maya is not just illusions but maya is more of imagination. In imagination comes meaning n thus illusions and delusions. Thus, In terms of philosophy the gita also talks of existentialism. Bringing meaning to an inherent meaningless world... Thanks to #devduttpattanaik we can now know the deeper meanings without following any authority or religion. No wonder the religious bigot hate him so much! #bhagwatgita #MyGita #quote #culture
#MyGita #bhagwatgita One of the finest practical philosophy given in Bhagwat gita and explained lucidly by #devduttpattanaik. Narayani and Narayana... the intriguing game of metaphors 😇 So many Instagram quotes n so many stories but nothing comes closer to these metaphors. Respect++ 🙌 for our indian culture! 🙏
What is wrong with my #nation? you may have wondered abt it. There are no simple answers to this complex question. Bt we have few models to understand this. Max Weber studied #authorities in various countires. He tried to capture the idea behind working of tht authority - "The #knowledge n #knowhow". He identified 3 reasons why people may accept an authority. 1. Traditions - the authority is accepted since ages due to some age old tradition. Eg. Priests, kings. 2. Charisma - the authority is accepted due to faith in charisma of tht authority. Eg. celebrities, godmen. 3. Legal rational - such authority is created by law eg. Police officer. In case of #India, it shifted from mixture of 1st n 2nd type authority to 3rd one, post independence. But Mere getting rid of British was not enough, the later part i.e. #SelfReliance was most important. For tht India adopted a legal rational authority n #democracy The legal rational authority is the system of government based on a #constitution to avoid arbitrary use of power. A Constitution gives a framework for legal rational authority to work democratically for its people. But Indian society n ppl ingeneral lacked know how aspect of this authority. Why? 1.Rule of law i.e. a law equally applicable to all without an exception. Bt The traditional Indian society i.e. traditional authority is based on discriminatory practices - different rules for different caste, gender n leaders. We expect such elite exception in new forms for us. 2.Establishment of state - state building is a complex process bt thankfully the makers of constitutional had the knowledge n knowhow. They did their best to establish various government institutions n strengthen them. Bt they were the educated few n they failed to pass on the knowhow of statecraft. Rather their successors (conveniently) ignored passing on the knowhow n thus society fell back to old known authority - maibaap culture. 3.Responsibility tht democracy carries to keep their self freedom intact remained illusive to mass n ppl today still fancy a Charismatic maiBaap authority for self liberation. Thus, Lack of knowledge n knowhow is one burdon of democracy tht we still carry.
#outrageporn #media #posttruthera
#indiaaftergandhi #politics #india #Godly Vs #Rationality #DrAmbedkar I dont know why and how, but the wisdom of ancient india is locked in the sacred sense of spirituality. You dont get to access it, neither scrutinize it. If one claims its existence you have to believe in the one, no matter if that one is a demagogue. We cannot govern a society with same logic. A social order needs rule of law and religion can not offer such system. For that we need to understand need of the laws not blindly believe in them. Only then we can be a great nation.
#quote #god #homodeus